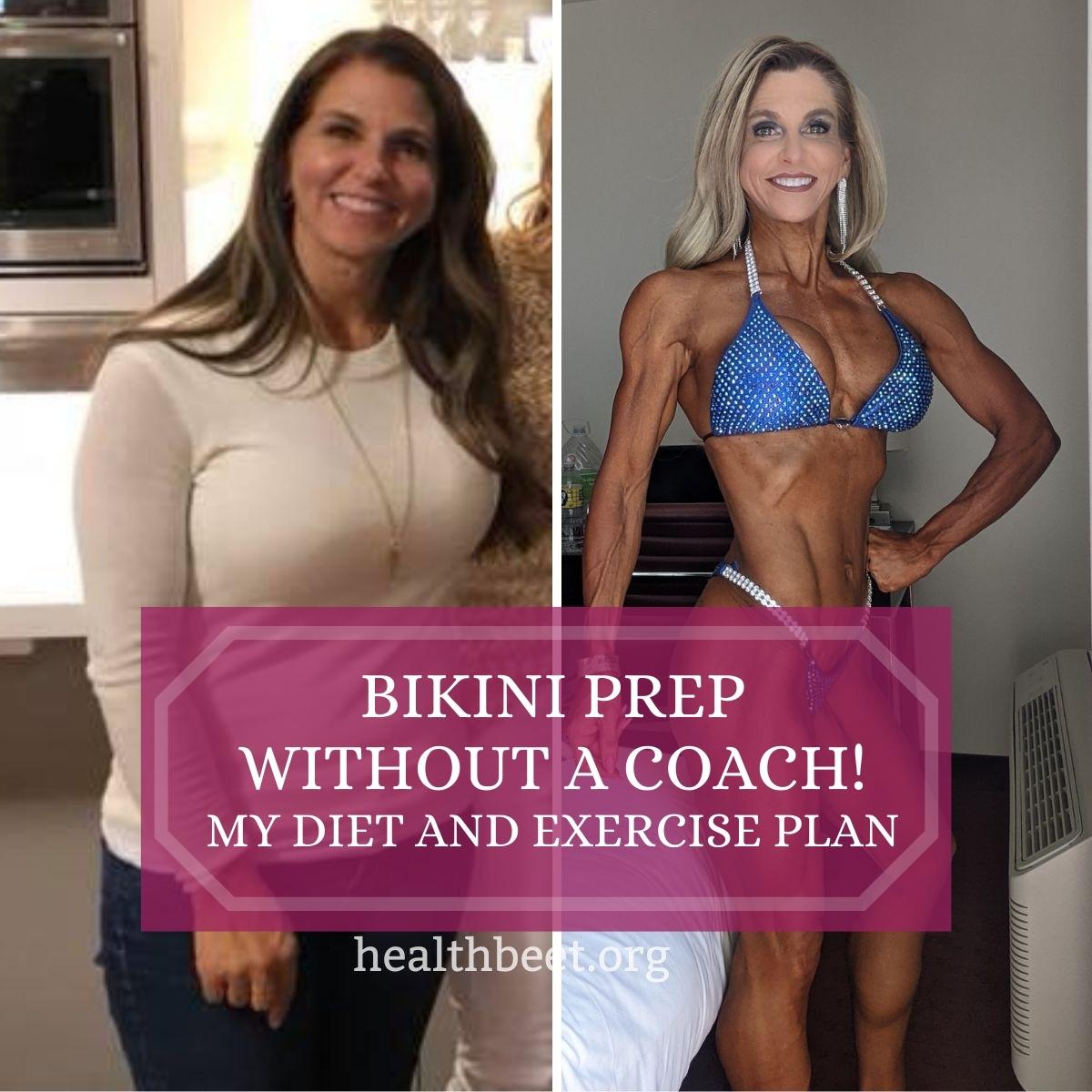 The diet, workout, as well as the little things I did in preparation for a bikini competition, without a coach. “Die with memories, not dreams”.

Recap of my Weight Loss Story

This was still too heavy to fit into my frame, as shown by this photo taken in 2017.

I set a goal to lose ten pounds more from 2017’s weight. I did this by paying more attention to what I was eating and WHY. (You can read the weight loss stage here).

At the end of 2019 I was frustrated again because I still didn’t feel like I had the physique that represented my healthy lifestyle. I ate healthy food, and I exercised! I did all of the above!

I didn’t share this on my previous weight loss story post, but I remember telling my husband, “If I commit 100% to counting calories for the next 6 months and I still can’t get to my desired weight, than I am paying for liposuction!”And I was serious. I was determined to give it my all for six months. It was almost as if my metabolism would explode. ‘must be broken’Liposuction is the only option.

I was also going through a midlife crisis and an empty nester crisis. I wanted to set some goals that would really challenge me and make my life more interesting. This is when I entered my first ever bikini show. Read about my first bikini show and the last 10 pounds. It worked, I’m glad that I finally gave it a try and stopped counting calories.

Bikini show number one was supposed to be a bucketlist goal. I pledged to never do it again.

I did it. After my second bikini show, I resolved to never do it again. (I just hate standing on that stage!)

Then, I did it again Saturday! What’s wrong with me?

Preparing for the Future 6 months before it is too late

My weight fluctuated between 110 and 115lbs in January of this year. It was still great! That is the ideal weight for me.

However, I was also thinking that I should do another bikini showcase. To be honest, my last show was a disaster. I thought I could bring a better body. I was stuffed to the brim with too much food and too little water on my last show day. I wanted another chance.

I was planning to perform in March in Utah. I figured that 8 weeks would be enough time to get ready.

I began to weigh and measure my food more accurately. I thought I was only eating 1500 calories. But there was a lot of food that I didn’t track (veggies, condiments etc.).

Once I started tracking 1500 calories honestly, everything and everything, the scale started to come down on it’s own. January 15, 2015, was my starting weight at 114 lbs.

I tried to get the coach that I had hired to help me in Utah 4 weeks before my March show. To my surprise, he said he didn’t want me competing there! WHAT?? I had already spent 4 weeks in my own little prep and he told me I couldn’t do the show in March!

That’s when I decided I would sign up for an out of town competition of my choice, and do it without a coach!

So, From March – June I had no one to check in with, ask questions. Show my progress pictures and have no one to assist with logistics or posing. But considering I’m a 48 year old amateur, and not an elite IFBB competitor, I didn’t think it mattered too much.

And I’m glad I went solo! I was able to save money and not feel the pressure of performing well on stage as a coach, which was a huge weight off my shoulders.

A friend from the gym mentioned that she was performing in Sacramento, California and that I should join her. I immediately gave the money. NorCal ChampionshipsI got a hotel and was 100% committed. It turns out that spending money motivates you to give your best!

My diet hasn’t changed much in the past 2 years to be honest. On or off prep, I’ve been eating the same foods over and over. I gave myself a lot more flexibility from Summer through the end of the year, but I’m a creature of habit, and I actually LIKE the foods that I have on my plans.

Here’s some meals I took photos of the last few months. They aren’t consecutive days. They were just labeled that way. I tend to eat the exact same thing for several days straight before switching to a different meal.

Day 4Here are the details from this full-day of eating.

Tracking honestly The kicker when I’m trying to “dial it in”To be more precise about tracking and to not eat between meals, it is important! The grazing gets out of control some days more than others, and it’s hard for me to track bites, licks, or tastes.

Cutting out Diet Coke: 3 months ago, I knew I’d have to quit my diet coke habit if my waist was going to come in smaller than before. I couldn’t hold my ab muscles tight during the last show. I couldn’t even mentally connect to them! So I quit cold turkey! *READ MY DIET COKE STORY HERE WITH MY BLOATING BEFORE AND AFTER PICS

Sodium makes my weight fluctuate several pounds! I didn’t realize how much water I was retaining, but I knew I was getting excessive with the salt. The more vegetables I ate the more salt I consumed. My weight was lower the next day when I avoided the salt shaker. And you could see my muscles defining again. I kept that in my toolbox until the show.

I ate the same foods for the last few weeks, but I reduced the calories to 1200 calories and added 80-100 grams of carbs (except on long runs days). I looked leaner every day.

My workout for bikini prep

In the last 2 1/2 years I have added 10 lbs of muscle, which I’m thrilled about! (As measured using Dexa)

My workout hasn’t changed in the past year and a half either. I run 45-60 minutes each week and strength train for 45 minutes. I do have a high-carb day when my running time exceeds 60 minutes.

Each day I do five different exercises. I train at the gym, using a combination of dumbbells, machines, as well as a barbell. Except during quarantine, that home workout is here

I try to make the weight as heavy as I can, but I don’t take more than a 30 second break between sets. I do plan to change this so that it’s heavy enough that I need a full minute or two between sets.

This brings us to the peak week, the last week!

I honestly didn’t change much during the week of the show. I was already slim enough (mostly 104 lbs) and my diet was clean. But, I had to make an effort to “fill out the muscles”I cut back on carbs towards week’s end.

In the last few weeks I have been on carbs lower than 100.

I also stopped using the salt shaker and increased my intake of water. I consumed 1 1/2 gallons per day up to show day. Then, I stopped drinking water altogether and only took a few drops. I didn’t want to bloat again.

I decided, unless I was a contender for a top spot, I didn’t want to spend my money on the show tan, or the official makeup artist. Each one costs $125 or higher!

So I bought it Pro Tan, DIY kitThe color this year was 100X better than what I got from the show tanner the previous two years. (year 1 looked green, and year 2 – TOO DARK!)

I would have loved professional makeup, especially because my face was too pale to match my tan. It’s what my sister calls “my ghost face pictures”. haha!

I wore a balayage for my hair. Hairpiece for Thin Hair Thick! It’s easy to curl once and it will stay curled. Plus, I won the hairpiece during a giveaway earlier this year, and it meant I didn’t have to pay for my hair to be done at the show.

I thought I looked better at this show than the two previous ones. The competition was tough again. There were more women aged 40+ than there were under 40. My age group of 45+ was the largest.

Although I didn’t get placed, I did get 8th out of 12th, and I’m not mad about that! (here’s the placings). I met some incredible women that I will never forget. I shared a room in a class with a friend that I met at my local gym. She was a great instructor!

After the show, we went to eat. It was amazing! I had pizza, nachos, and a sandwich.

I must admit that I have to go back next year to see if I can do better. haha.

Is it necessary to keep a food diary in order to lose weight? {Day...